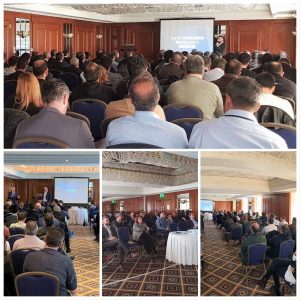 Westnet, a member of the Olympia Group of Companies, organized its first partner meeting in Cyprus. At the event, which took place on Wednesday, March 6th at the Hilton Cyprus Hotel, innovative products and solutions were presented from HP Inc. and HPE – Aruba, which Westnet represents both in Cyprus and Greece.

The event was attended by more than 100 executives, representing more than 80 companies operating in Cyprus. HP Inc. and HPE – Aruba were represented by HP’s Distribution & Commercial Channel Manager, Harris Amourgis and HPE Territory Manager – Aruba, Kostas Libanos respectively. The event was opened by Nikos Tsarouchas, Country Manager of Westnet Cyprus, presenting the company, which has gained a significant share in the distribution of technology products in a year of presence in the Cypriot market.

George Daviotis, General Manager of Westnet, said: “Westnet Cyprus is growing rapidly, and just one year after our expansion to the Cypriot market, we have managed to develop a significant network of associates that showed up in large numbers at our first event in the country. Collaborating with a number of leading global vendros such as HP Inc. and HPE – Aruba, we are able to offer added value in services and products to our clientele, which includes companies with a wide range of operations. Such meetings, which offer expert and direct information about the latest technology in our portfolio products, are an integral part of our strategy and will be organized often in Greece and Cyprus. “