Skip to content
The founder of the Group, Panos Germanos, retains the role of mentor to the BoD and Management

The founder of Olympia

Entrepreneurship, innovation, meritocracy, humility, humanism. These are important elements that make up the DNA of the Olympia Group of Companies, inspired by its founder, Panos Germanos, whose current role is that of mentor, guiding and advising the Board of Directors and the management team.

Panos Germanos is an economist, businessman and founder of the Olympia Group. He was born on June 16th, 1950, in Milies, Ilia and grew up in Athens. The youngest child of a large family, he started work while completing his studies at the Department of Economics of the Athens Law School. A thoughtful, studious and curious spirit, who once he got to know the technology industry, was fascinated by it to the point where it became his vocation.

Panos Germanos is an economist, businessman and founder of the Olympia Group. He was born on June 16th, 1950, in Milies, Ilia and grew up in Athens. A thoughtful, studious and curious spirit, who once he got to know the technology industry, was fascinated by it to the point where it became his vocation. 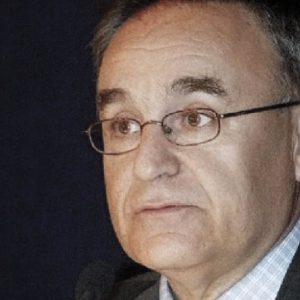 His career began as a sales executive at Union Carbide – UCAR and Duracell battery companies. This experience opened his eyes to the market potential to the point that he founded the first “GERMANOS” batteries store in the centre of Athens in 1980. The business flourished and the Germanos name became synonymous with mobile telephony and technology in Greece.

Over the next twenty-five years he made his mark on the business map in Greece and abroad, especially in the rapidly growing retail, technology and energy sectors. Despite the international success, he keeps a low profile and stays focused.

Olympia Group has transformed into an international investment group in the space of just a few years. Panos Germanos’ philosophy focuses on the creation of “champion companies”: the development of Westnet and Softone, PLAY’s rise to the number one mobile telco in Poland, the strategic deal between Public and MediaMarkt (PMM), creating the largest omnichannel consumer electronics retailer in Greece and Cyprus and the evolution of SUNLIGHT into one of the largest companies in the energy storage sector, have cemented the conditions for a dynamic future.

Since the early years of his business ventures, Panos Germanos’ approach has focused on creating strong executive teams, employing international best practices on topics of corporate governance and business ethics, and adapting them to the internal structures and operations of his companies.

With this philosophy he has made the Olympia Group of Companies an international investment organization, comprising of five companies with a presence today in 8 countries and employing 8.500 people. The management structure of his companies is based on strong boards that feature independent Directors -both in Olympia and in its subsidiaries- as well as strong management teams with experience, knowledge, and drive.

This structure ensures smooth operation and sustainable development, guaranteeing the success of the Group for the benefit of all stakeholders.

Although he has won high profile recognition in Greece and Poland for his business achievements, the founder of Olympia Group shuns the limelight. In 2018, he and his family founded the Folloe Foundation with a social emphasis on skills development, education and poverty alleviation through job creation and the improvement of infrastructure in local communities.