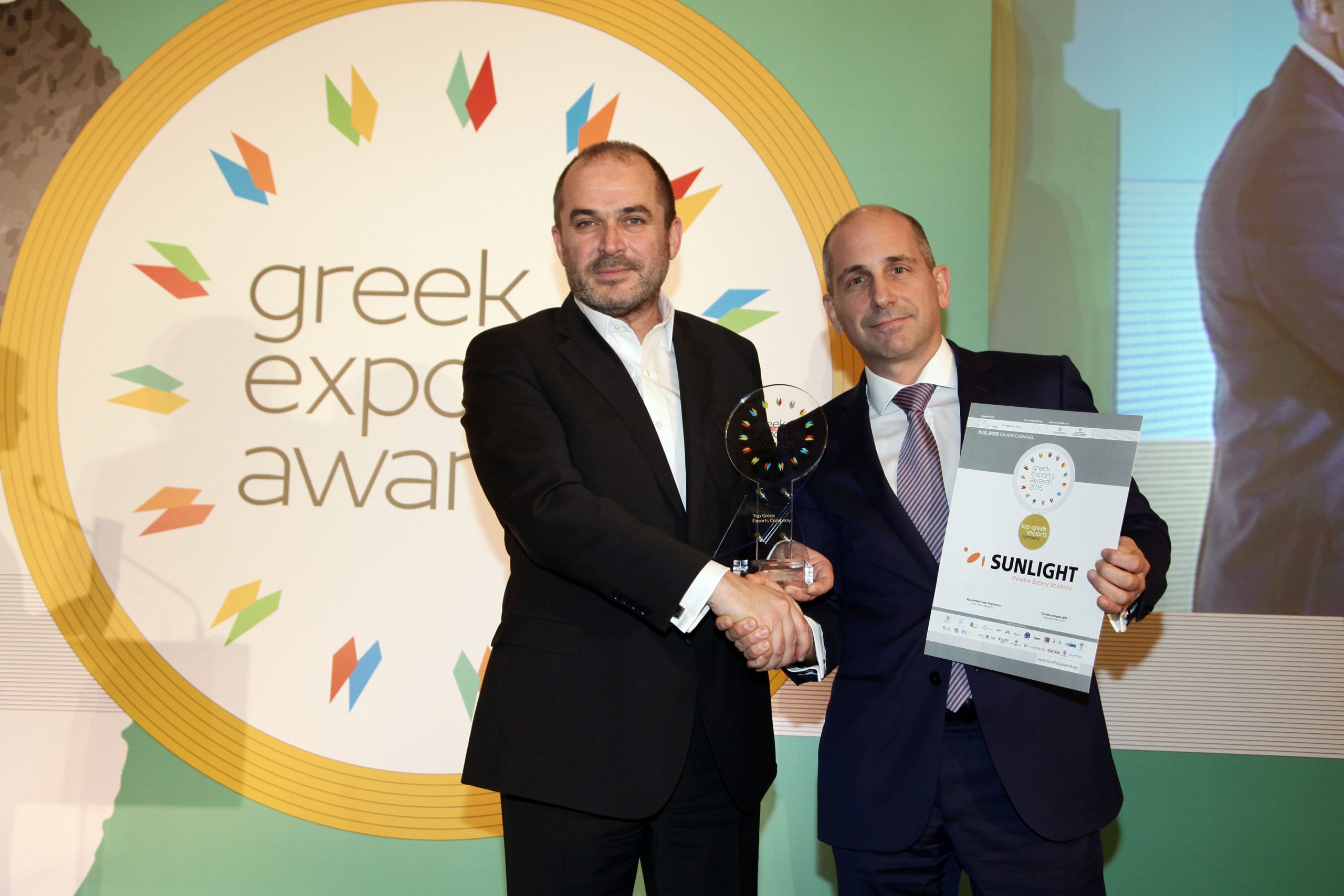 On behalf of the company, CEO Vasilis Billis received the top export award known as “TOP GREEK EXPORT COMPANY” from the General Secretary of the Ministry of Development, Finance and Tourism, Mr. Elias Xanthakos

SYSTEM SUNLIGHTS – member of Olympia Group belonging to the interests of Panos Germanos – was awarded twice at the event “Greek Exports Awards 2015” that took place on Friday, December 11th, at Divani Caravel Hotel. The event was attended by top government officials and prominent figures of the Greek business community.

The company received the major award of the event. It was recognized as the “TOP GREEK EXPORT COMPANY” following a comprehensive survey and evaluation by the relevant Award Committee which was based on a voting process involving over 8,000 participants. The company also received the GOLD award concerning an additional category as it was named the “TOP INDUSTRIAL COMPANY”. SUNLIGHT is purely a Greek company and for 24 years now has been in an important “journey” the destination of which will allow the company to play an important role in the international market place. Through a cautiously planned strategy, the company exports 98% of its production to the international markets, in over 100 countries across 5 continents. With the organization, know how, persistence and with the energy of its 620 employees, SYSTEMS SUNLIGHT has managed to operate the 2nd largest production plant for Industrial Batteries in Europe.

Through its overall course that spans 24 years, SUNLIGHT is now regarded as a success story “made in Greece”. Currently, the company employs 620 people, creates 1,200 indirect jobs in the country and contributes to the development of know how for a network of collaborating companies that further strengthens the level of domestic industrial production. At the same time, both the innovation that characterizes every phase of production, as well as the strategic commercial partnerships achieved all over the world, have made the company the 2nd largest producer in Europe, in terms of industrial batteries production volumes. The double recognition of SUNLIGHT at the awards’ event is the result of the implementation of a dynamic investment plan, focusing on the generation of added value and know how in the area of Greek entrepreneurship, particularly in Northern Greece, along with its significant contribution to the Greek economy in general.

During the event, the Chief Executive Officer of SYSTEMS SUNLIGHT Mr. Vasilis Billis stated the following: “The top recognition we received today at the Greek Exports Awards event honors our company with the recognition of its extrovert business strategy and constant investments towards the systematic improvement of our competitive advantages, within and outside the Greek borders, through the production of innovative industrial batteries and complete energy storage solutions. Against to people wishing Greece was a “small” country, with poor capacity, weak prospects and limited dynamics, SYSTEMS SUNLIGHT is a strong proof of the ability of Greek entrepreneurship to transform companies into major global players.”

The Greek Exports Awards are organized by the Association of Diplomats for Economic and Commercial Affairs of the Foreign Ministry in collaboration with Ethos Events and HRIMA economic and investment magazine. The event aims at the broader recognition of best practices in the area of exports, as well as of ideas and partnerships between major export oriented companies in Greece.

SYSTEMS SUNLIGHT SA, belonging to the interest of Panos Germanos, has dynamically entered its third decade of presence in the Greek and international market, producing and distributing energy storage and utilization systems. SUNLIGHT is among the top producers of energy systems and products globally, offering total solutions in areas with high requirements, such as Industrial Production, Supply Chain and Transportation, Telecommunications, Construction, Information Technology, Infrastructure Works and Defense.