PUBLIC: AGAINST THE MARKET TREND, THE COMPANY ACCELERATES ITS EXPANSION BY ACHIEVING SALES GROWTH OF 26% DURING 2015, IN GREECE AND CYPRUS 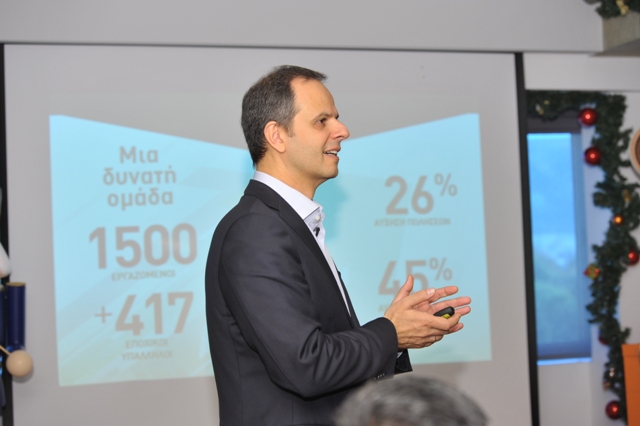 PUBLIC: AGAINST THE MARKET TREND, THE COMPANY ACCELERATES ITS EXPANSION BY ACHIEVING SALES GROWTH OF 26% DURING 2015, IN GREECE AND CYPRUS

Public Stores, the largest network of technology and entertainment stores in Greece belonging to businessman, Panos Germanos, posted a significant sales growth of 26% y-o-y during the 11-month period of 2015. The performance of Public Stores was communicated via a special event from the company’s Chief Executive Officer (CEO), Christos Kalogerakis.

By demonstrating 10 years of successful presence, Public Stores are characterized by especially dynamic growth in both the Greek and the Cypriot market. In 2015, with a constant focus on the highest level of service offered to consumers, Public Stores continued to strengthen their position and market shares in all major product categories. In particular, they constitute the #1 choice of consumers in the categories of books, music products, movies and gaming, whereas in the current year Public Stores captured the #1 position in the sales of mobile telephony handsets and accessories among all domestic retail chains (11-month period of 2015).

The strong results of the year 2015 were also attributed to the strategic decision of Public Stores to further enrich their existing product portfolio by entering the market of seasonal products with regard to selective categories. The above strategy is expected to continue delivering results in 2016 as well.

The continuous increase observed in the number of visitors coming to Public Stores is a strong indication of the high positioning of the stores among the consumers. The company’s Management estimates that during the year 2015 the number of visitors will exceed 25 million with regard to the physical stores, posting an increase of 25% year on year. The same dynamic growth is observed in the online visitors with regard to the company’s e-shop corners (www.public.gr and www.public-cyprus.com.cy), with the visitors exceeding 32 million and posting an increase of 30% compared to 2014.

Christos Kalogerakis, CEO of Public Stores, commented on the business performance of Public Stores: «2015 constitutes a year of reference for our company since during a tough period, as it was broadly seen, Public Stores achieved a significant sales growth and impressive improvements in all financial indicators. At the same time, during the 11-month period of 2015, we hold the #1 position on the level of retailers, with regard to the sales of mobile telephony handsets and accessories, whereas we demonstrate rising market shares in all major product categories with regard to technology and entertainment. Our vision is to create a unique working environment offering continuous incentives for development to our people, but also a unique destination for our customers. Public Stores constitute a favorite brand for Greek consumers, a brand which according to our customers as well as partners, constantly evolves and grows offering unique experiences to the Greek audience.»

The company’s ambitious plan with regard to the expansion of its workforce contributes largely to its successful financial results. Today, Public Stores employ 1,500 people in the 48 stores that operate in Greece and Cyprus. Moreover, during the Christmas season the company’s workforce further expanded by 417 new employees who were hired as seasonal personnel.

The company applies a clear strategy with strong focus on the customer and by constantly investing in new technologies that benefit the customer. The above strategy is a catalyst towards the achievement of a stronger position for the company and the strengthening of its financial results. Particularly, within the year 2015, the stores implemented the so-called Genie solution which is a radical change in the standards of servicing customers. Genie informs the sellers of the stores on real time basis about the availability of products, thus saving effort and increasing the time that can be devoted to servicing the customers. The development of the particular solution is an exclusive initiative of the experienced internal team of innovations within the company’s IT department.

The emergence of Public Stores among the strongest retail chains in the Greek market with continuous technological developments and innovations is also testified by the successive awards granted recently to the company. In particular during 2015, Public Stores won more than 5 awards from recognized institutions in Greece for their performance on the level of omni channel.